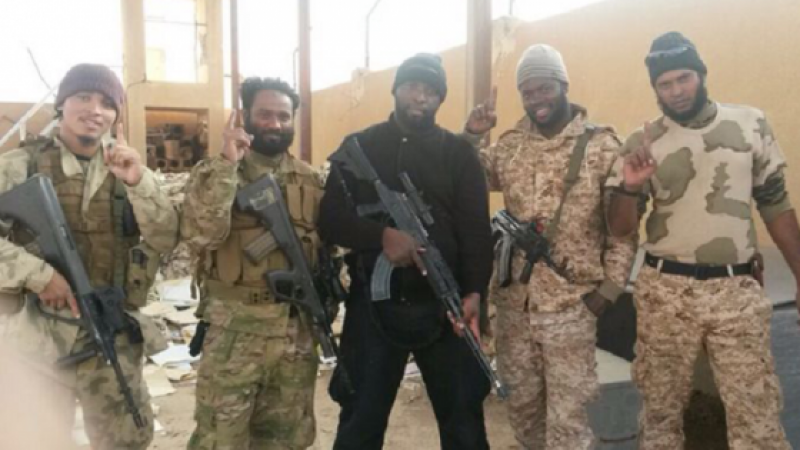 PORT OF SPAIN, Trinidad, Sunday December 11, 2016 – It’s no secret that several Trinidadian Muslims have left the country to join Islamic group ISIS. But in a candid interview, one of them, a sniper in the organization, admitted to killings in his homeland and urged Muslims still living there to wage jihad in the twin-island republic.

Abu Sa’d at-Trinidadi, one of the first three Muslims to leave Trinidad and Tobago to join the jihadist organization, told ISIS magazine Dabiq about why he rejected his family’s Baptist Christian faith and embraced Islam, and even went as far as urging Muslims who live in the twin-island republic to “terrify the disbelievers in their own homes and make their streets run with their blood”.

No dates were given in the interview but at-Trinidadi, whose birth name is Shane Crawford, spoke about his own “jihad endeavour” in his homeland. He admitted that he and a few of his Muslims brothers to took revenge “whenever the disbelievers in Trinidad would kill or harm a Muslim”.

“We would work to accumulate money in order to buy weapons and ammo. . . .We were successful in many operations, and this was only by Allah’s grace. Abu ‘Abdillah, my wife, and I were arrested at one point, but the police weren’t able to make a case against us. We were nonetheless charged for possessing guns and ammunition,” he recalled, adding that his computer and phones were seized and police found the videos, books, and lectures on jihad.

at-Trinidadi said the government claimed they were planning to assassinate the prime minister and a number of other ministers. He said while it would have been an honour for them to have done that, they had not.

It was in 2011 that a state of emergency was declared by the People’s Partnership government, during which several suspects were arrested for allegedly plotting to kill then prime minister Kamla Persad-Bissessar.

Several trinidadians are snipers with isis, according to the magazine dabiq. (photo credit: dabiq)

“We were imprisoned for terrorism along with some Muslims who merely knew us as well as others whom we had never even met before. Alhamdulillah, they planned and plotted but Allah is the best of planners. They were unable to make a case against us and we were freed, by Allah’s permission, and despite being placed under surveillance, we went back to doing what we knew we had to do, commanding the good and prohibiting the evil,” at-Trinidadi said.

The Muslim went on to disclose that before he and two of his closest friends Abu ‘Abdillah and Abu ‘Isa – who were killed in the ISIS war, or “attained martyrdom” as at-Trinidadi put it – left the country to join their ISIS colleagues in the Middle East, they killed two men whom they had been hunting. He said the killing occurred in the middle of the city in broad daylight and was caught on camera. Even though his two friends were arrested, they were eventually released and eventually left Trinidad and Tobago.

The guerrilla fighter was highly critical of Muslims remaining in Trinidad and Tobago, saying they “clearly have some weakness in their faith which they have to correct”.

He chastised them for choosing to remain in a place where they “have no honour and are forced to live in humiliation, subjugated by the disbelievers”. But, at the same time, at-Trinidadi told them they could take the “golden opportunity to do something that many of us here wish we could do right now”.

“You have the ability to terrify the disbelievers in their own homes and make their streets run with their blood. Where is your jealousy for the religion? They are bombing your brothers and sisters day and night in the land where Allah’s law is supreme. It is an obligation upon you to act and force them to think thrice before bombing the Muslims. Therefore, terrorize the disbelievers and make them feel fear everywhere, even in their own bedrooms. Due to their mere disbelief, their blood by default is lawful to spill,” he said in a message to the Muslims.

“Attack the interests of the Crusader coalition near you, including their embassies, businesses, and civilians. Burn down their government institutions just as they try to bomb our buildings where Allah’s law is upheld.